High above the sky, workers climbed atop the roof of High Point Place.

They looked like Spider-Man as they traipsed along the 29-story tower where roof construction has been ongoing.

While 29 floors may sound like an impressive height, it's only bested in the region by the tower next door which stands at 33 floors, or 35 once you make it to the roof's terrace. In total, there are five towers and four low-rise buildings.

The massive undertaking to replace the roof began in October, more than a year after Hurricane Irma swept through the region in 2017. These are said to be the tallest buildings between Tampa and Miami.

"You know what happened after Irma, it was hard to get anybody to do anything," said Jean Turnbull, a board member of the High Point Place Condominium Association.

Irma left behind destruction and a backlog of damaged infrastructure. A year after the Category 3 storm hit Southwest Florida, thousands of homes still had the blue tarp over their roofs.

Not many of them were as challenging as repairs 300 feet up in the air.

Turnbull, a resident of High Point Place since 2011, has been coordinating the rooftop efforts.

"You see these people crawling around up there," she said. "It's interesting." 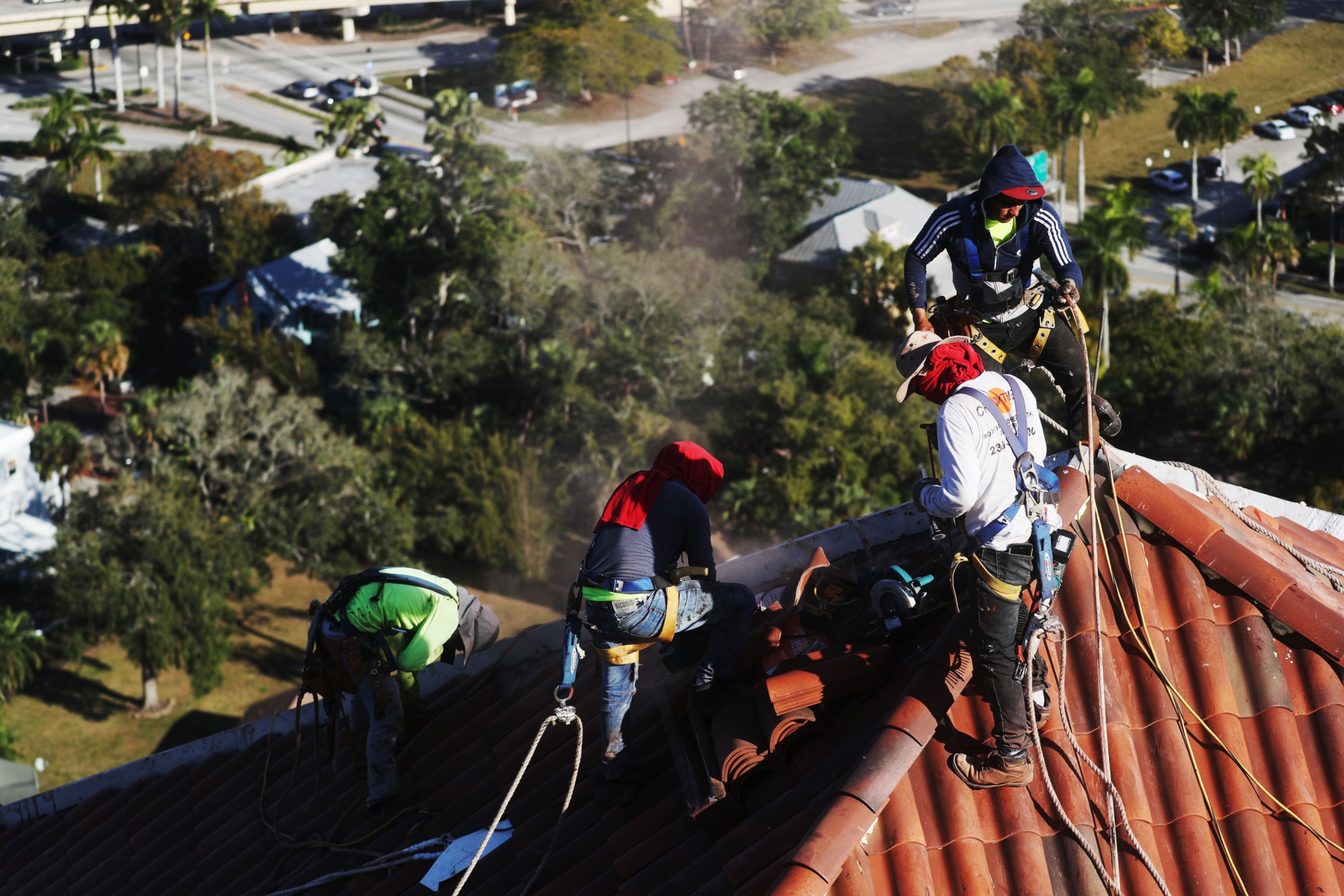 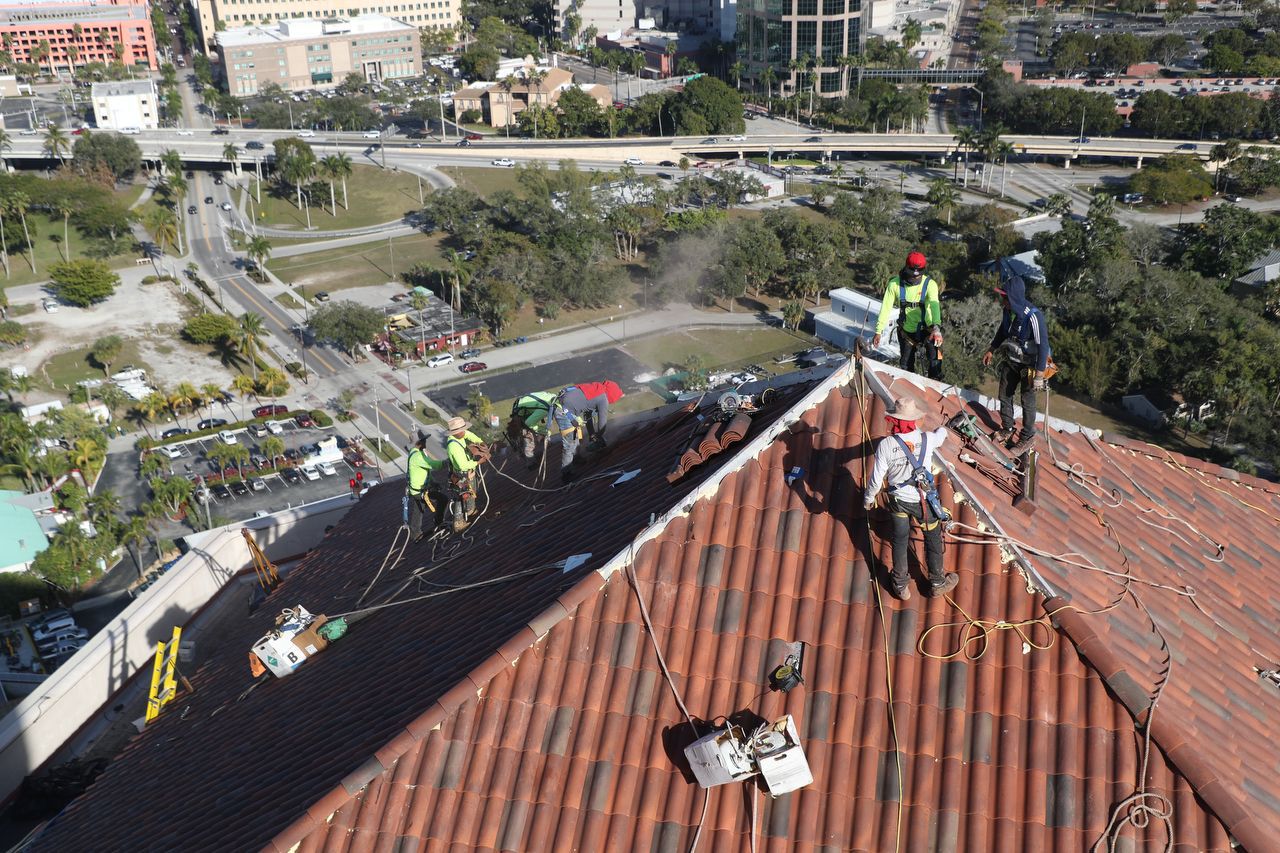 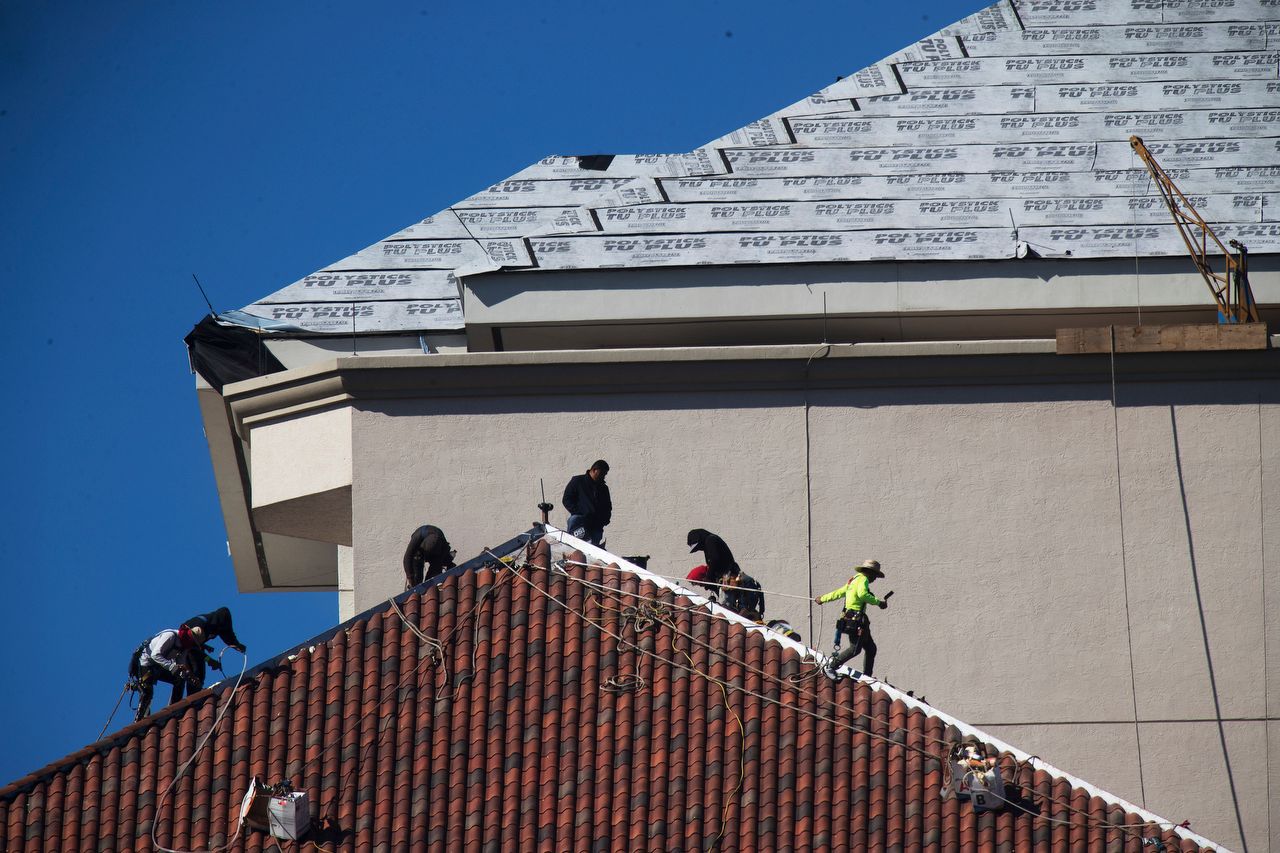 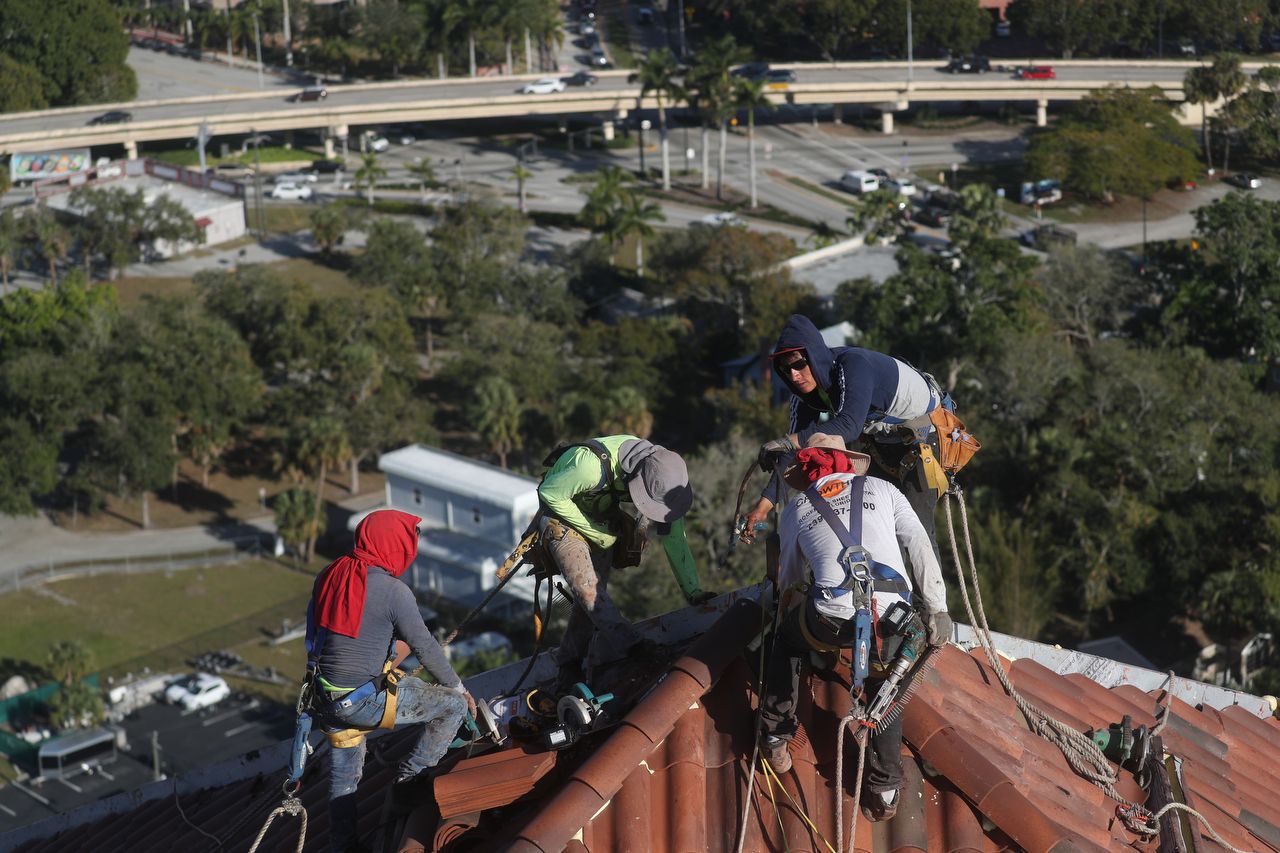 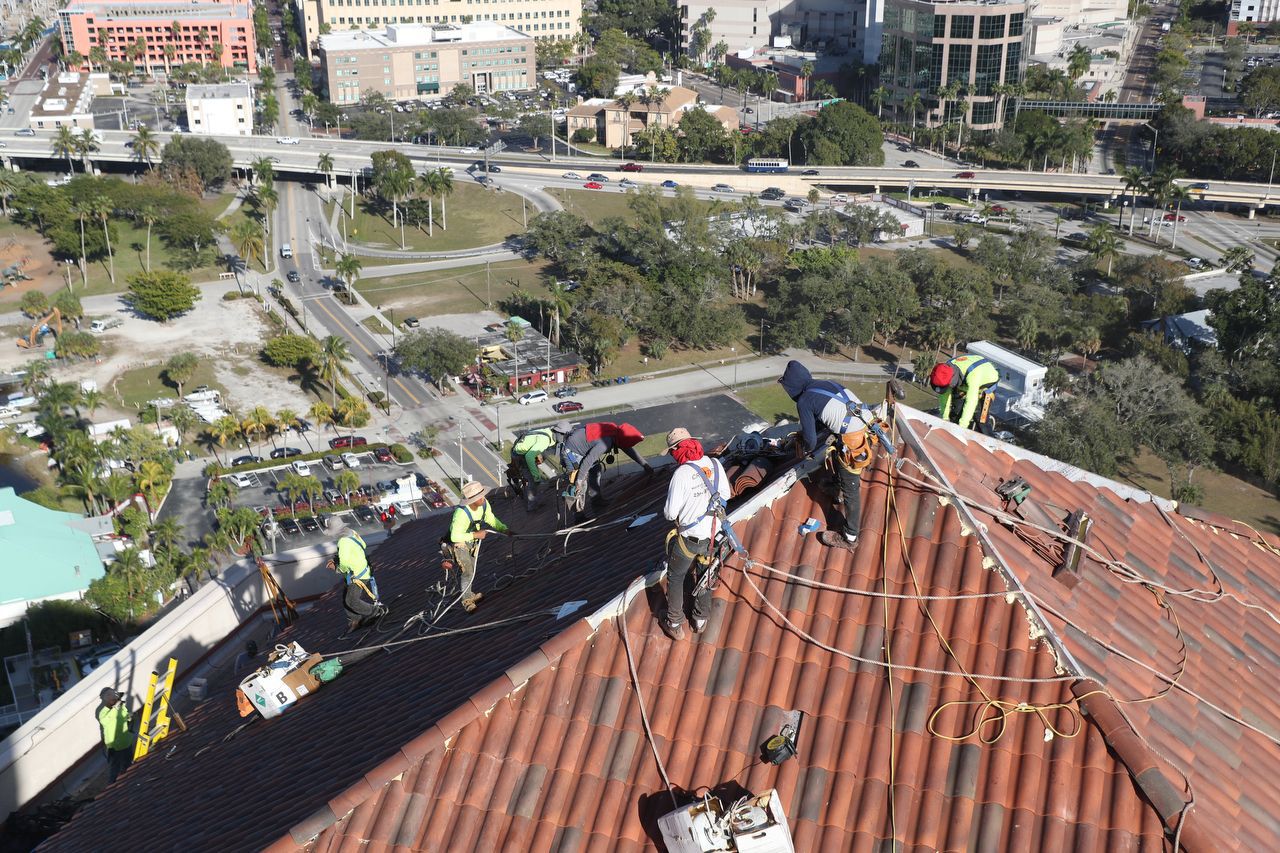 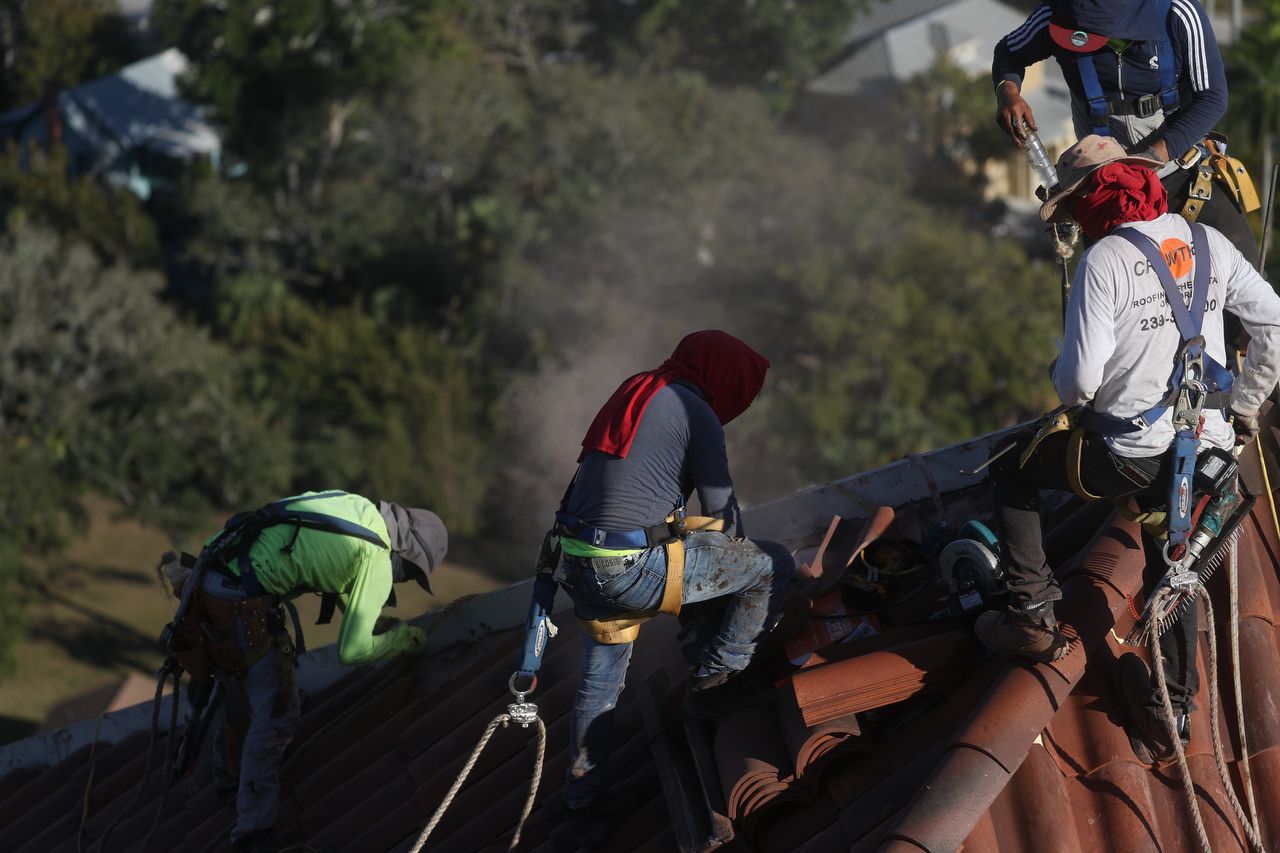 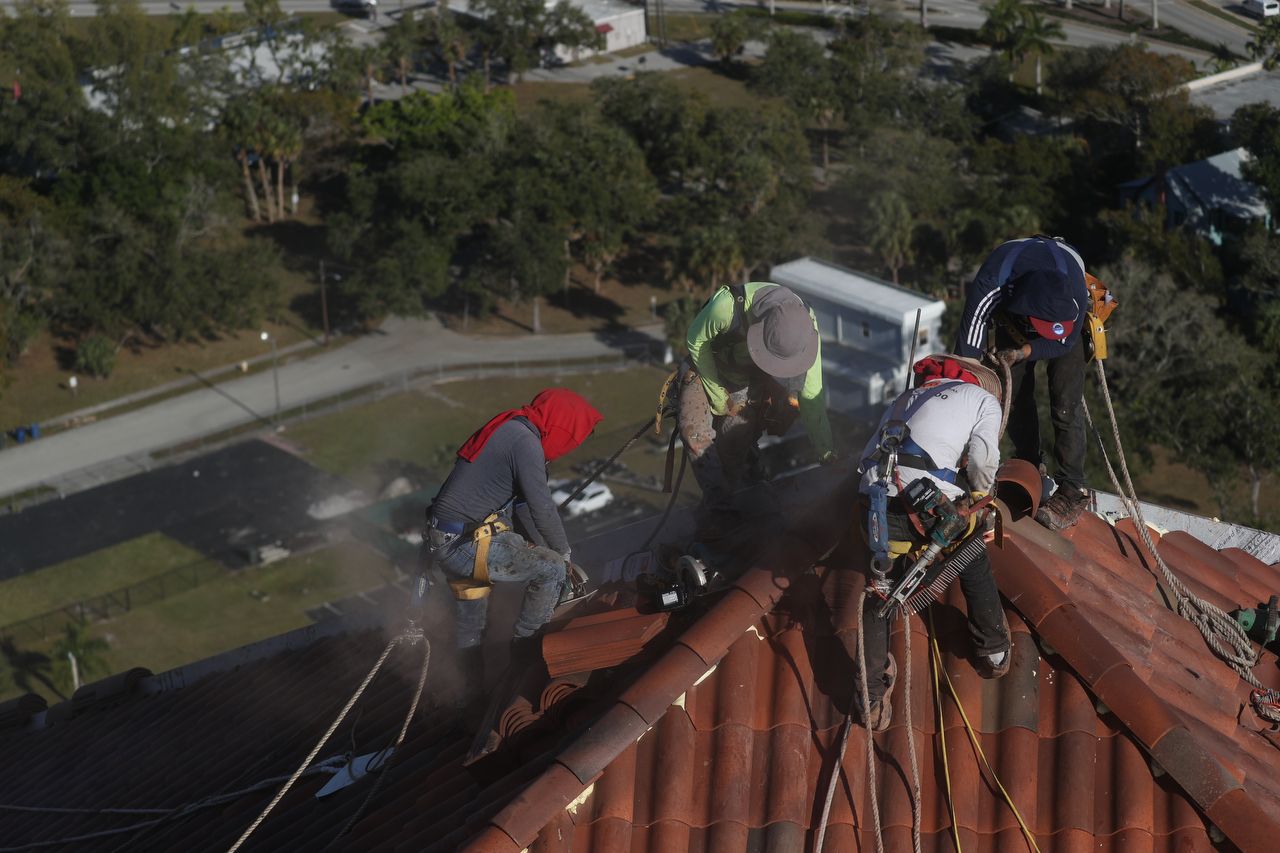 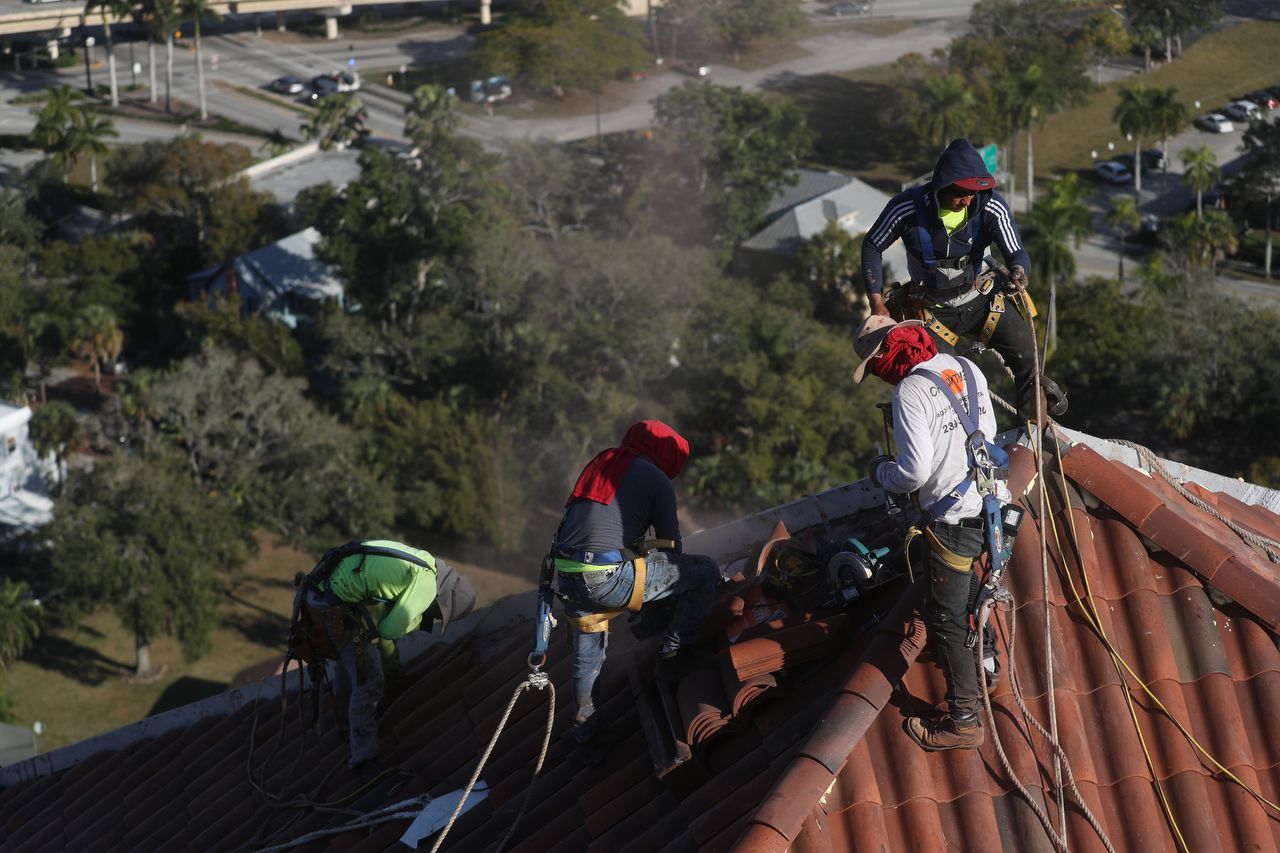 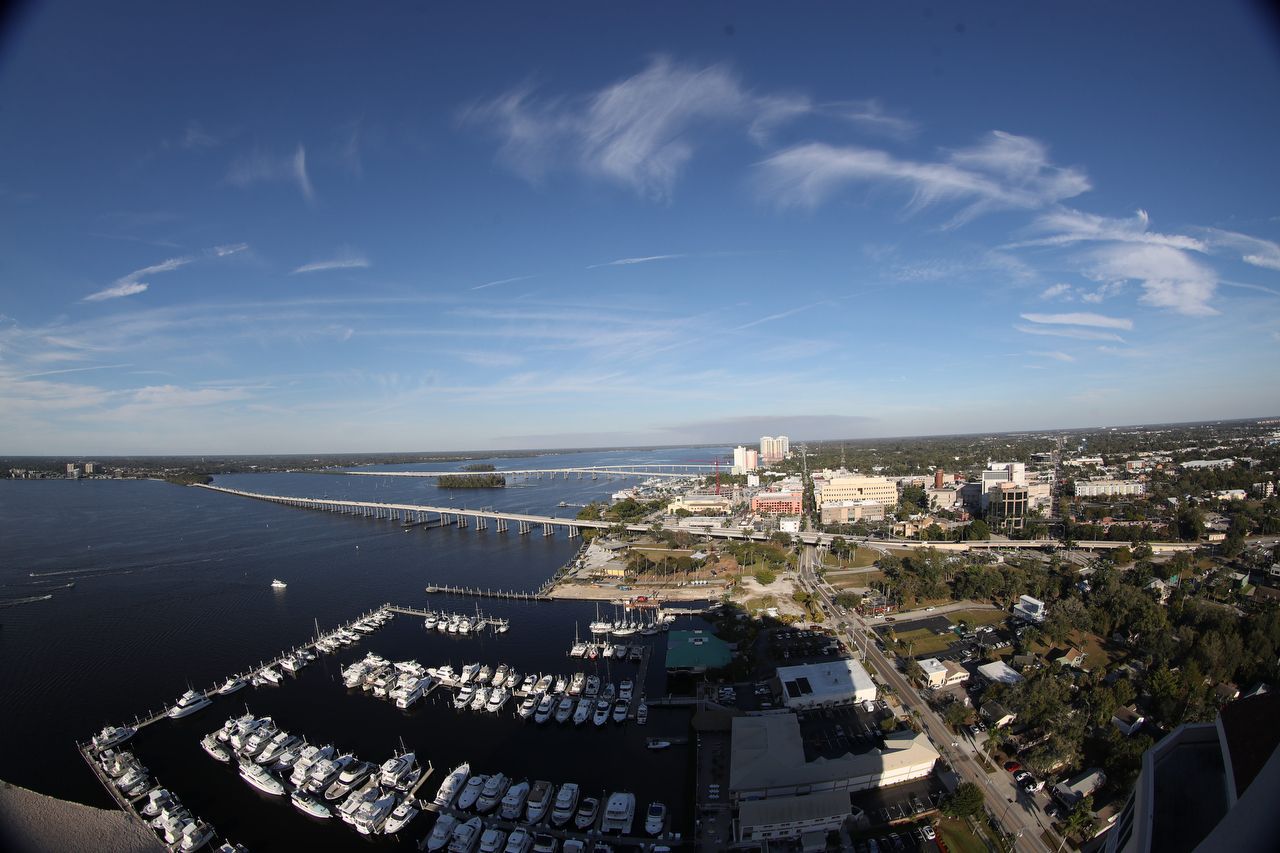 Work is expected to cost about $2.8 million, Turnbull said. Irma didn't damage the entire roof, but it did lift enough tiles that required reconstruction on every surface of the towers, including the three-story buildings closer to ground level.

"(Irma) knocked off about 35 percent of the tiles," Turnbull said. "If more than 25 percent are damaged you have to change all of the roofs."

On a recent weekday, workers clipped into harnesses walked across the roof, getting ready to end the day.

Is it scary to work so high off the ground?

"You surpass the fear, eventually," one worker responded in Spanish.

"In a normal construction site, it's a logistical nightmare," Turnbull said, but because of High Point Place's footprint along the Caloosahatchee River near downtown, it became more difficult.

First, a staging site had to be found for construction materials, tucked in behind the archway entrance off of First Street, Turnbull said.

From there, consultants and architects had to figure out how to get the tiles up to the roofs. It was impossible to use a crane, Turnbull said.

So they built a hoist that carries a load of bricks to the top of the towers, Turnbull said.

"A lot of manual labor and a lot of ingenuity went into it," she said.

It took three weeks to do the first roof, but since then work has been moving at a quicker pace, she said.

Ruben Ponce, project manager with Crowther Roofing, said work is expected to go through June. About 20 workers are involved in the project. According to Ponce, Crowther built the original roofing at High Point Place.

The weather has to cooperate in order to move work along, Ponce said.

So far it has, because the rainy season has not arrived, Ponce said, but recent colder days prove problematic because there has been ice on the roof.

"It's frozen in the morning," Ponce said. "You have to wait until the layer of ice is melted and you have to go up and start working."

The most time-consuming part is hoisting the tiles up to the floor. Before that can happen, workers have to bring down the old roof tiles to bring up the new ones, he said. Less than 100 tiles can be moved in the container at a time.

Ponce said he enjoys watching the end result of the project.

"You look all around and you can see Fort Myers and the river. It's beautiful," Ponce said. "In this particular job, you can see it from miles away and I can say that’s a roof I put on."

Sharing updates and projects that we are working on in your community.

See What Others Are
Saying About US!

Information Collection, Use, and Sharing

We are the sole owners of the information collected on this site. We only have access to/collect information that you voluntarily give us via email or other direct contact from you. We will not sell or rent this information to anyone, at anytime, for any reason. That's a promise.

We will use your information to respond to you, regarding the reason you contacted us. We will not share your information with any third party or anyone outside of our organization, other than as necessary to fulfill your request, e.g. for information, initiate repairs or work orders, or other products or services that you are inquiring about.

Unless you ask us not to, we may contact you via email in the future to tell you about specials, new products or services, or changes to this privacy policy. We will always provide an opt out option so that you can decide to receive or not receive these important emails.

You may opt out of any future contacts from us at any time. You can do the following at any time by contacting us via the email address or phone number given on our website, furthermore, all email communications will include an opt out link so that you can stop email communications from us in one click. Keep in mind that inorder for Crowther to process work orders and to make you a happy customer, communication on some level must exist.

Wherever we collect sensitive information (such as credit card data), that information is encrypted and transmitted to us in a secure way. You can verify this by looking for a closed lock icon at the bottom of your web browser, or looking for "https" at the beginning of the address of the web page. This is only valid when transmitting sensitive or financial related information.

If you have any questions or feel that we are not protecting your privacy, you should contact us immediately via telephone at 239-337-1300.

Welcome to our website. If you continue to browse and use this website you are agreeing to comply with and be bound by the following terms and conditions of use, which together with our privacy policy govern Crowther Residential Roofing and Energy Services, LLC’s relationship with you in relation to this website.

The term ‘Crowther’ or ‘Crowther Roofing’ or ‘Crowther Residential Roofing’ or ‘us’ or ‘we’ or particular variations of any of the aforementioned, refers to the owner of the website whose registered office is at 11791 Metro Parkway, Fort Myers, Florida 33966.

The term ‘you’ refers to the user or viewer of our website.

The content of the pages of this website is for your general information and use only. It is subject to change without notice, however, we will try to do our best to keep the information as accurate and timely as we most possibly can. However, if you have viewed some information that you feel may be suspect, please do not hesitate in contacting us via phone for clarification.

Neither we nor any third parties provide any warranty or guarantee as to the accuracy, timeliness, performance, completeness or suitability of the information and materials found or offered on this website for any particular purpose. You acknowledge that such information and materials may contain inaccuracies or errors and we expressly exclude liability for any such inaccuracies or errors to the fullest extent permitted by law. However, as we have previously stated, when in doubt, we'll be happy to clarify and correct any erroneous information as soon as we discover it.

Your use of any information or materials on this website is entirely at your own risk, for which we shall not be liable. It shall be your own responsibility to ensure that any products, services or information available through this website meet your specific requirements. However, since we are in the business of pleasing our customers 100% of the time, we will do our very best to make sure this information is as accurate as possible. I think they call it "double checking"!

This website contains material which is owned by or licensed to us. This material includes, but is not limited to, the design, layout, look, appearance and graphics.

Reproduction is prohibited other than in accordance with the copyright notice, which forms part of these terms and conditions.

All trademarks reproduced in this website, which are not the property of, or licensed to the operator, are acknowledged on the website. If we ask for permission to use, you should also.

Unauthorized use of this website may give rise to a claim for damages and/or may be a criminal offense. Ask us, we just may say "yes", but you have to ask!

From time to time this website may also include links to other websites. These links are provided for your convenience to provide further information. They may signify that we endorse the website as we are not in the business of providing information that is questionable, however, use these external links and information at your own risk as we are not responsible for other companies websites, information and/or advice. We have no responsibility for the content of the linked website(s).

Your use of this website and any dispute arising out of such use of the website is subject to the laws of the United States of America and specifically The State of Florida, County of Lee.

If you have any questions or feel that we are not abiding by the terms and use policy, you should contact us immediately via telephone at 239-337-1300

You may NOT use the Crowther Roofing and Sheet Metal of Florida, Inc. trademarks below in any blog, news article, or on your website without our written consent.

If you have any questions about the use of Crowther Roofing and Sheet Metal of Florida, Inc trademarks or logos, please contact us at: info@crowther.net

Crowther Roofing & Sheet Metal of Florida, Inc, also known as "Crowther Roofing" is licensed by the state of Florida with multiple types of licenses. The Department of Business and Professional Regulations provides a Licensing Portal which you can use to verify the statuses of our licenses.